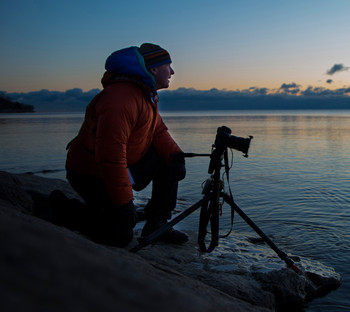 With a wealth of carefully cultivated experience that draws on three decades of work in Canada and abroad Peter is widely considered among the top visual story-tellers in Canada. His proven visual and journalism skills have been honed from years of assignments photographing everything from business leaders to revolutionaries; work that has earned him international recognition with four National Newspaper Awards and five Photographer of the Year titles to name a few. (see below)

As an independent visuals professional Peter's corporate and commercial client base continues to grow with creative, well produced and consistently high quality location production while still providing editorial clients with the highest standard of images and video.

“Peter is an absolute pleasure to work with. He is the consummate professional, seamlessly establishing a comfortable environment for all. His talent for finding beauty in all moments speaks for itself. My team would welcome the opportunity to collaborate with him again.”
- Meegan Guest, VP, Communications & Strategy, Cleveland Clinic Canada

Peter also brings his vast visual storytelling expertise to the academic arena, where he teaches college-level digital photojournalism using best practices in blended learning techniques to engage the next generation of visual journalists.  He is always happy to share his experience and knowledge and is available for workshops and speaking engagements as requested.

Peter has been named Photographer of the Year five times, has won four Canadian National Newspaper Awards (nominated nine times) and has won the prestigious Governor General's Michener Award for Public Service Journalism. His work has been recognized many times by the National Press Photographer's Association (NPPA), News Photographer's Association of Canada (NPAC), Pictures of the Year International (POYi), the Society of Newspaper Design (SND) among others.  His multimedia work has been recognized internationally as a Webby Award Honoree three times, a Webby Award Finalist once, a POYi winner, and NPAC POY winner.