January 16, 2011  •  Leave a Comment
It's rare for our photo staff at The Globe and Mail to shoot sports action.  The exception was the Winter Olympics in Vancouver which we had four staff photographers assigned to.

Although this wasn't an assignment, I did spend some time recently shooting hockey. The story and photographs appeared over two pages in The Globe and Mail on Monday, Jan. 17, 2011, as well as on the website.

I've been interested in photographing Mennonites for many years, but I've been waiting for a reason to do so. A short time ago, while watching the NHL's Winter Classic I got to thinking that other than the game being outside there really wasn't much "classic" about the game.

So where do you find hockey played in a true classic fashion, the way it might have been played in it's genesis? The answer, I discovered, is among people who choose to live a simpler life - the Mennonites. 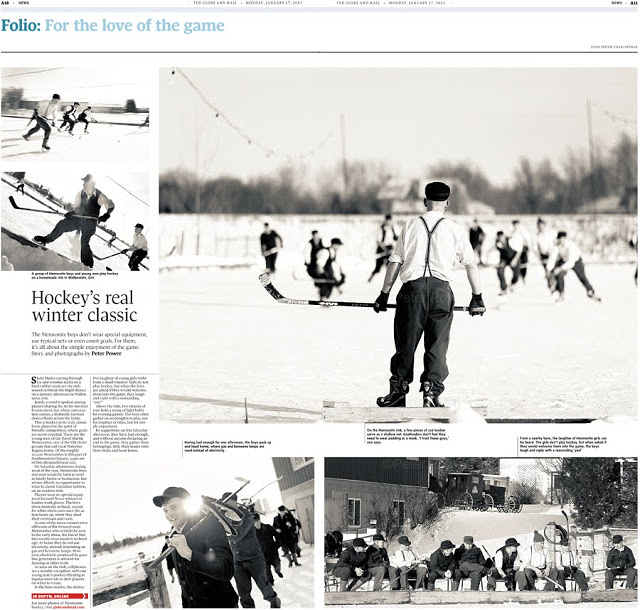 I was able to get an "in" to meet with some members of the community in north Waterloo region, but I was fearful that my efforts to make images would be fruitless. The group I was sent to meet are some of the most strict of the Old Order - the David Martin Mennonites. My instructions from my Mennonite friend were to introduce myself, explain why I was there (the story I wanted to tell), and ask questions as I would anyone else I'd just met. But NEVER could I ask to photograph them. Due to their faith they are obligated to say no to photographs, and that would have been the end of that. Despite this they have, on occasion, been photographed in the past, so I was optimistic that I could work within their comfort level.

My hope was that they would allow me to spend time with them, and gradually I would begin to make photographs. The approach worked like a charm, although I felt as if every image I made would be my last of them. It became a game of sorts, with the boys tolerating my presence, my questions, and seemingly my camera, as long as I remained subtle. It wasn't easy to make photographs because it was difficult to bring the viewfinder up too long to study the subject and wait for moments. I only had one young man give me a sideways look while I pointed the lens at him, but I stopped and he carries on as if nothing had happened.

It was great shooting these boys playing a game I have always loved. The experience of being around them playing a game simply for the pleasure of it is one I'll not soon forget. Just before the game ended, I was sitting on one of the chairs, at the end of the "bench" so to speak, when one of the boys leaned out and spoke in my direction. "Did you get any good shots," he asked, with a smile on his face. I could only smile as I answered with a nod, and the words "I think so," which was as honest as I could possibly be.