Photographing Death and Hope in Somalia

October 02, 2011  •  Leave a Comment
Note: This blog entry was originally published here on globeandmail.com
Stepping off the aircraft in Mogadishu, Somalia, I recognized the wall of oppressive heat that I’d first felt there in 2006. This time I was there to work with The Globe and Mail’s Africa correspondent Geoffrey York, and the situation would be dramatically different from each of our own previous experiences there.

Every assignment I’ve ever accepted that involves some level of risk has always been accompanied by a series of emotions. Packing and waiting to get on with the job is an anxious time. I find foreign assignments to be more difficult as my children grow older. Now teenagers, their understanding of the world and the places I am sometimes asked to work in adds to their own anxiety. As hard as it used to be to leave behind two small children, I found it more difficult knowing how worried they were while I was away this time. Unfolding events in Mogadishu didn’t make this any easier to deal with.

As I passed through security at Pearson airport, I received sad news from Geoff that a Malaysian cameraman had just been killed in Mogadishu. At the time details were sketchy, but it was still a very blunt reminder of the place I was about to visit and the need for constant vigilance. I hoped my teenagers wouldn’t see that report in the news. 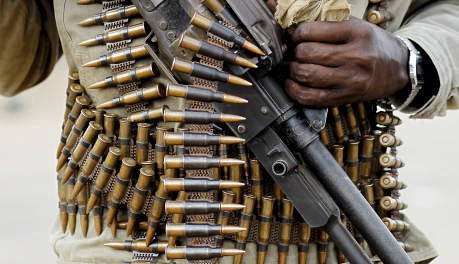 Care must be taken while working in such a potentially hostile environment. Paid security is a must right now if you’re there independently and not working under the watchful eye of the UN forces. We entrusted our safety to a local named Bashir who has become legendary for his ability to broker agreements among various factions in Mogadishu that help keep foreigners relatively safe. He said to us: “You’re going to ask for things, and you won’t always be happy with the answer, but your safety is our primary concern.” Those were comforting words but unnerving at the same time. Working while surrounded by a group of heavily armed men dedicated to keeping any threats at bay offers its own challenges. The men knew when to be close, and when to make themselves scarce. They quickly learned what my needs were as a photojournalist and made their best efforts to stay out of the way of the images I was making. It’s Somalia after all, and weapons are everywhere, so having an armed man in a photograph is nothing unusual, but I didn’t want gunmen in my photographs to be those paid for by us.

People are dying by the thousands in Somalia. For the moment it’s not the violence itself, but widespread famine and disease that is killing people. It didn’t take us long to find our way to Banadir Hospital where hundreds of desperate families were converging to find help for their dying loved ones – primarily children.

The situation in the emergency area was surreal. Every bed had a child -- sometimes two -- with a parent close at hand. But the beds were being shuffled back and forth across the floor while cleaning staff pushed inch-deep mop water around the room until it found a place to drain near the walls.

One of our security team drew our attention to a small room off the main corridor. “A baby has died,” he simply said.

The sight and sounds of the inconsolable mother in that room after her seven-year old boy had just passed away, and of the father gently closing the boy’s eyes, will never leave me. My photographs are the best way I know to help people fully comprehend the human impact of such a tragedy, so I made images and tried to contain my own emotions. 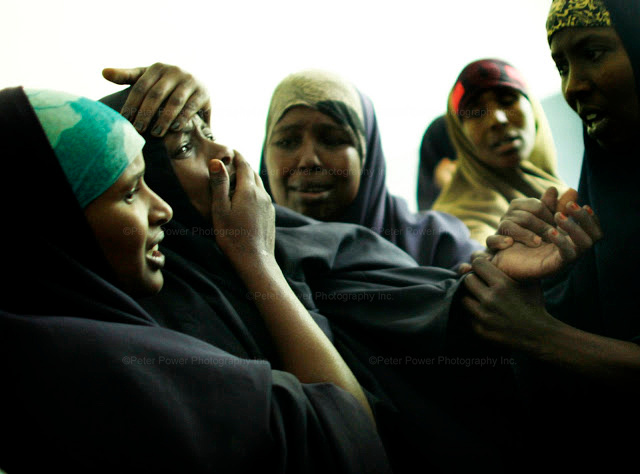 It’s never easy to photograph peoples’ pain, suffering and grief, but the need to make the best photographs possible that speak to the issue and will affect readers pushes everything else aside -- at least temporarily. I find that after my cameras are away, and I have a moment to reflect, is when the gravity of the things I have witnessed fills my thoughts. The idea of photojournalists being insulated from what they are shooting is a myth. In fact, we must look harder at the scenes in front of us, and those images are forever captured, not just on film or in pixels, but in our minds.

The sick children in Somalia are so small compared to healthy children around the world. I was fooled by their size, and their frail bodies, into thinking many were much younger than they were. But I was startled, on many occasions, to see reactions from children that I did not expect from those so young. There was much more wisdom and experience in the eyes that often peered back at me – and sometimes turned away - and my heart sunk at the realization that they understood all too well what was happening to them.

Everywhere we went in Mogadishu we found signs of recent deaths. Small shallow graves littered the open ground next to each camp. Other than the mounded red earth there was little to mark the graves, except a small circumference of earth that had been raked clean of debris, and occasionally a thorn bush laid on top to keep the dogs away.

There is no lack of suffering to bear witness to in a famine zone, but the rest of the world has a limited appetite for these stories. In Mogadishu we tried to look beyond the obvious, to find stories related to the death and disease that would help readers understand the broader picture. While working on one such story I found myself making images in a seaside fish market where the day’s catch is casually laid out on the floor and Somali cash changes hands above.

A young man politely asked if he could speak to me, and with our vigilant security guards edging closer to my elbows I welcomed his inquiry. After several attempts, and just as I realized that his level of agitation was growing dangerously high, I was finally able to understand his message. He was upset that while there was an ongoing famine in Somalia, and people were dying in the thousands, I was making pictures in a fish market. He did not understand nor appreciate why we would do this, and nothing I tried to say could help him understand, nor sooth his agitation.

This was exactly the kind of situation to be avoided - one that could turn ugly in an instant. The growing crowd, this conversation and the man’s tone dictated an early departure for us and within moments we had extracted ourselves from the crowded market as quickly as we had entered it.

A short time later while our small group of armed men, translator, and journalists sped toward the safety of our compound in the fading light of the day I couldn’t help but wonder, how, while trying to help the rest of the world understand Somalia, we might help Somali’s understand what we are trying to do there ourselves.

Each day in Mogadishu we found dispossessed families doing their best to survive. Shelters were thrown together with material salvaged from nearby fields, and the city’s rubble. The resourcefulness and determination to survive of those we witnessed was impressive. It was next to impossible to wander through the paths between shelters without drawing attention to ourselves, and for safety-sake we rarely stayed more than a half an hour in any one place. People spoke to us, told us their stories, and occasionally touched their finger tips to their sternums in a gesture that said, “I’m hungry.” 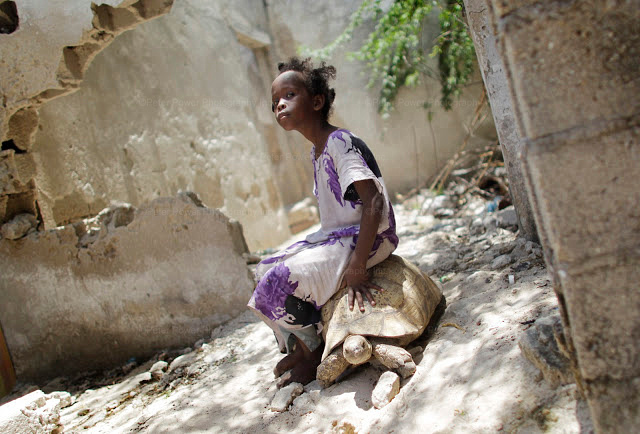 I’m convinced that one can find beauty and hope in every situation and there were certainly moments in Mogadishu, where I was occasionally able to photograph children playing and listen to their laughter. In one strange but beautiful encounter, while being escorted through a warehouse that served as a rehabilitation center for mentally ill patients, I spotted a little girl in a pretty, colorful dress, sitting atop a tortoise. She was curious to see the strangers in the compound, near her family’s home in a single room beyond a broken wall. She didn’t even flinch as the animal struggled to crawl beneath her weight.

Somalia’s children, certainly the most vulnerable now, must also be the hope for that country’s future.
Keywords: Somalia, assignments, famine, photojournalism