April 16, 2011  •  Leave a Comment
Several weeks have past now since we ran a story about the death of Leo Nangmalik in Repulse Bay, Nunavut. Patrick White, who wrote the original article "The Trials of Nunavut" which ran the previous Saturday, provided an update - an obit of you will, a post script - which was a sad but poignant reminder of the reasons we went to Nunavut last November to investigate crime in Canada's north. 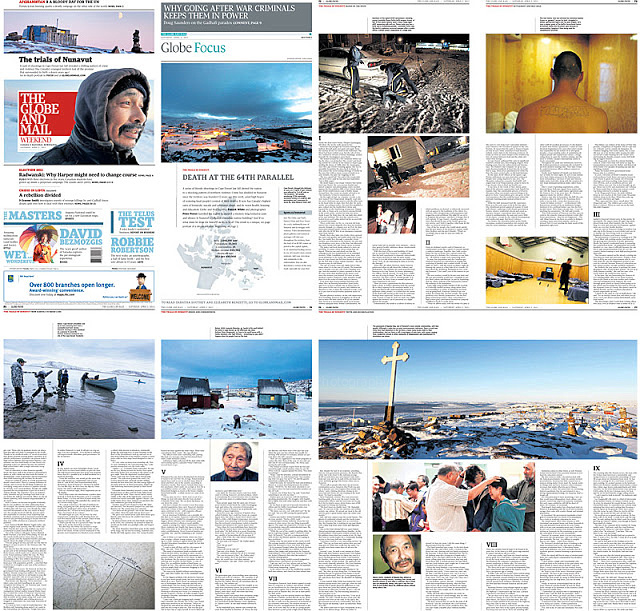 It took four months of editing, writing, web development, scheduling delays, and other publishing conflicts before the piece was finally ready to be published in The Globe and Mail on April 2, 2011 and on www.globeandmail.com. Everyone involved in the story worked incredibly hard to combine the wealth of visual material, heart wrenching stories, and masses of facts and information into an efficient presentation. The story of Canada's newest territory and it's dysfunctional nature, lack of funding, huge cultural differences, and incredible challenges in a rapidly changing world is one we all felt deserved the time and space on our pages. 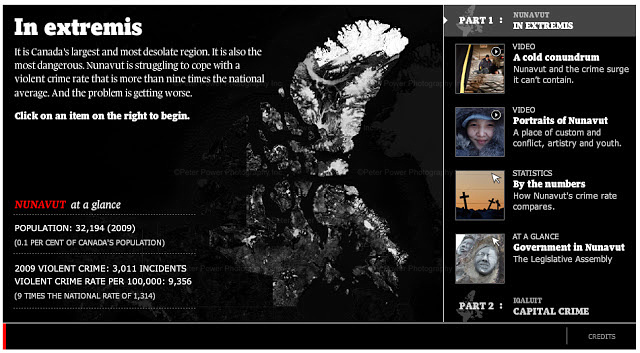 We were not prepared for what came only hours after publication.

We were not prepared for the tragic news from the remote hamlet of Repulse Bay that Leo Nangmalik, 50, one of the key people in our story - a man who shared his incredible story with all of us willingly - had taken his own life only two days prior to publication. The news filtered in slowly to us on Saturday afternoon but hit us like a ton of bricks.

My heart goes out to Leo's family and friends. While we only had the pleasure to spend a small amount of time with him, his willingness to share his story with us, and every Globe reader was very brave, and in my opinion, very necessary. The path his life took is sadly similar to far too many people in Canada's north, and the problems they face have been overlooked and swept under the carpet for far too long.

Of course there were discussions in the newsroom about how to deal with this tragedy, especially in light of the fact that Leo's image was huge and bold on our A1, and he was such a huge part of the story we had told. In the end we went with an Editor's Note to simply state what had happened, and followed up the next week with Patrick's update. 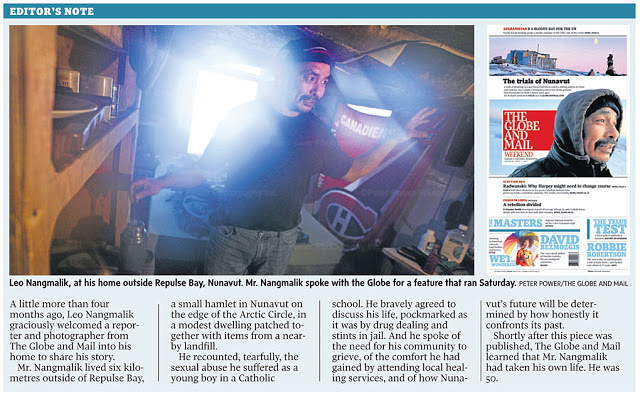 Reader reaction was mixed. Of course there are those who accuse us of killing Leo; a claim that we all know is ridiculous, but one never wishes to hear. For the most part readers were saddened by the news, and expressed condolences for Leo's family, and concern for future tragedies in that troubled area.

I liked Leo very much, and felt a real empathy for what he has been through. I felt hope that his success at finding some peace and a path to redemption might symbolize a greater opportunity for all people of the north. A day hasn't gone by since news of his death that I haven't thought of him.

I'm sure that everyone involved in this story is pleased with how this story has been received by our readership, and hopes, perhaps naively that some change may come from it. But it will take a long time, if ever, before any of us will be comfortable celebrating any of it. For now I'll hold on to the memories of the fine people I met during those short weeks in Nunavut and especially the one man whose life ended as yet another senseless tragedy in Canada's north.

Leo Nangmalik was fifty years old. During his tear-filled interview with us he expressed hope that the next fifty years of his life would be better than the last fifty. 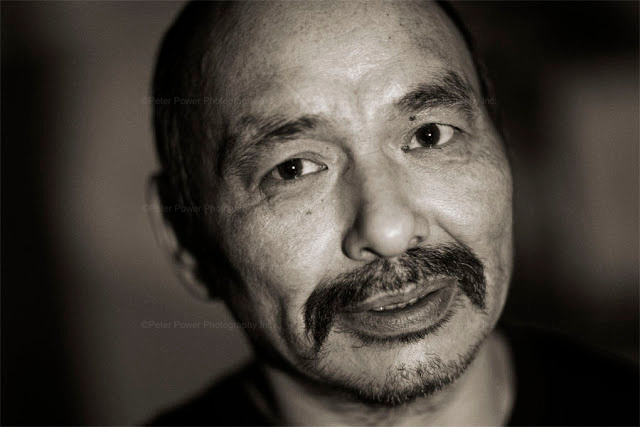