Only minutes after the special court at the Hague announced it’s verdict in the five-year trial of former Liberian President Charles Taylor on April 26, 2012 a halo appeared around the sun as it hung almost directly above the crowds gathered in downtown Monrovia to listen and watch the news. Immediately people here began to speculate on the meaning of this strange, and rare, atmospheric phenomenon. If people were supportive or not of the former warlord seemed to determine whether they thought God was happy or unhappy with the court’s guilty verdict in the eleven counts against Mr. Taylor for crimes against humanity.
The day before the verdict the inside back page of The Globe and Mail – a coveted glossy paper space usually reserved for international news – featured an advance story by our African bureau chief, Geoffrey York, and two of my photographs. Yesterday we ran a double page spread of stories and images from the streets here as Liberians waited and reacted to the news. 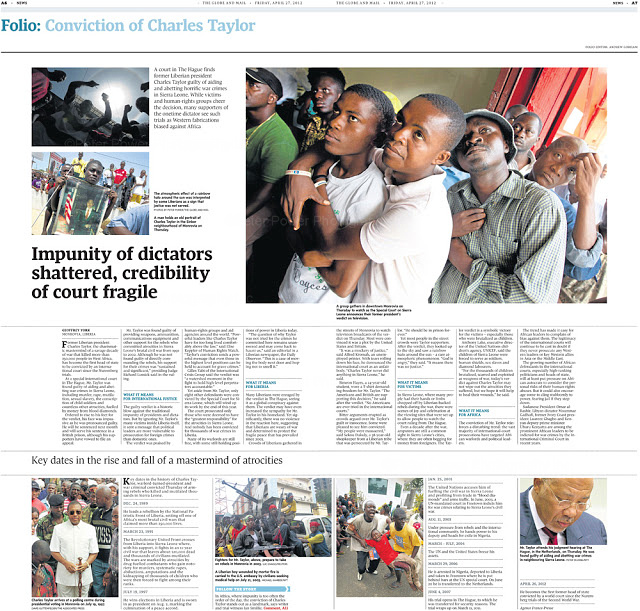 Geoff’s thoughtful planning ensured we were here in Liberia’s capital for the moment that the Charles Taylor’s verdict would be read at the Hague. The piece in yesterday’s paper provided some background to Globe and Mail readers and spoke of the level of support the warlord still has here. There are many here who support Taylor. There are many here who do not.
I sent ten images for my photo editors and editors to choose from for Wednesday’s story, and in the end they chose as their main an image of a young man named Peter Tarr. When he was eleven years old Tarr was captured by Taylor’s forces and was soon carrying a weapon and fighting battles. His story is similar to other child soldiers during that bloody time in that he was later captured by opposing forces and then forced to fight against Taylor. Somehow he survived the war and became a member of President Taylor’s Liberian Army. It was during this time, while fighting some of Taylor’s opponents that he was injured twice; first by a bullet through his upper thigh, and later a gunshot wound to his right arm that required an amputation from just below the shoulder. 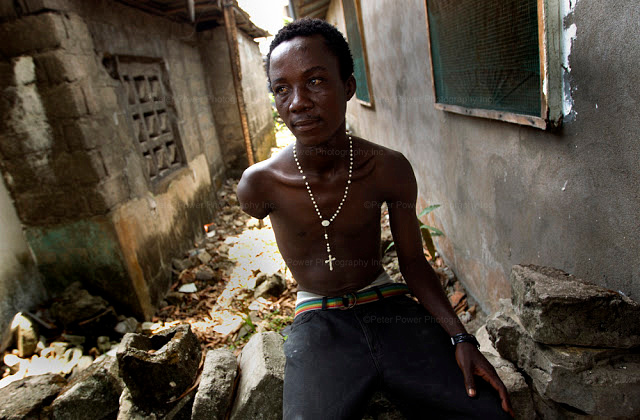 Tarr’s story is heartbreaking, but sadly, not uncommon in Liberia. Unemployed and disfigured, Tarr now spends his days, like many of this country’s child soldiers begging on Monrovia’s streets.
Remarkably Tarr has few angry words. He is unhappy that Taylor brought war to an otherwise peaceful nation, and that the years of war affected him, and so many others in such a negative way. And yet he seemed confident that justice would prevail. He was confident that if Taylor was guilty of war crimes he would be found guilty. If he was not, he would be found innocent.
In a country where many people seem to be judging Taylor based on the price of rice during his presidency (it was far cheaper then), this indifference by a grievously damaged young man like Tarr amazes me. Perhaps he is resigned after his ten-year struggle on Monrovia’s dirty streets and knows that neither decision in Taylor's case will change his fate.
Perhaps he is right.  Any damage that Charles Taylor, and men like him, could ever inflict upon Peter Tarr, and thousands like him, was done a long time ago.
But as several people expressed on Thursday, regardless of the verdict, Liberians may now finally be able to put this dark chapter in their lives behind them and move forward.
[The complete articles and a gallery of images can be found on globeandmail.com]
Keywords: Africa, Charles Taylor, Liberia, Monrovia, child, children, conflict, court, crimes, dictator, hague, humanity, news, photojournalism, soldiers, verdict, victims, war