Birth of a Notion

May 10, 2012  •  Leave a Comment
First off, kudos to the headline writer for this headline, "Amid the poverty of West Africa, the birth of a notion."

These words lead off a Folio centre spread in The Globe and Mail about a new program of free healthcare for expecting mothers and mothers of young children. Geoffrey York, our African Bureau Chief wrote the piece and the images are mine. Designer extraordinaire David Pratt did the layout. 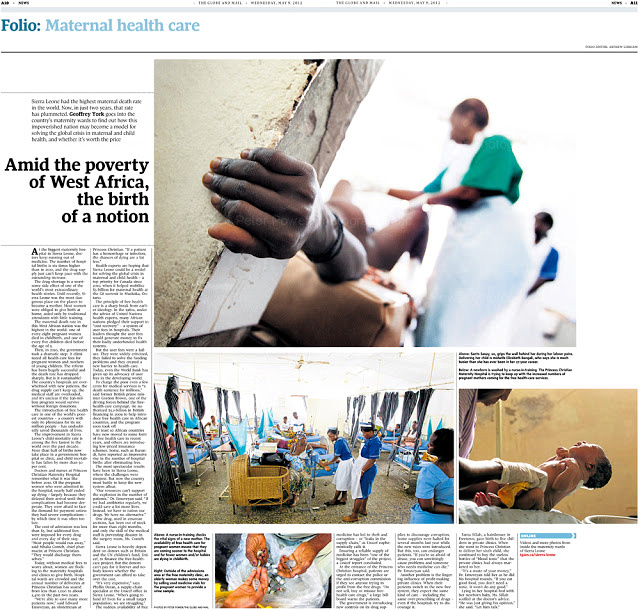 So much of our work in the media involves bringing light to problems and difficulties around the globe. It's critical that we continue to draw attention to areas that need it, but it felt great to be able to help tell a positive story, especially out of Africa, and specifically Sierra Leone, a country that has seen more than its share of suffering.

While there is much to be done in Sierra Leone there is no denying that this dramatic step is a very important one. The program in itself is not without problems, and the long-term sustainability of it in such a poor country will be a question for some time.

In Somalia last September Geoff  and I witnessed a lot of death and suffering. I photographed a 7-year old boy who had just died, and his grieving family. Those are images that I feel need to be made, and stories that need to be told.

But I have to say that being allowed to photograph a woman giving birth to a healthy baby boy, and coming through it herself without issue at Princess Christian Maternity Hospital in Freetown was a real privilege, and one that I will never forget.

Likewise I won't ever forget the smile and the generosity of Ruby Williams, the Matron of the Hospital, who took a lot of time during her hectic day to shepherd me around her hospital and patiently waited while I made images. Thank you Ruby.

Geoffrey York's story and links to a photo gallery and audio slideshow can be found at globeandmail.com.